Who’s Top Dog in Your House? 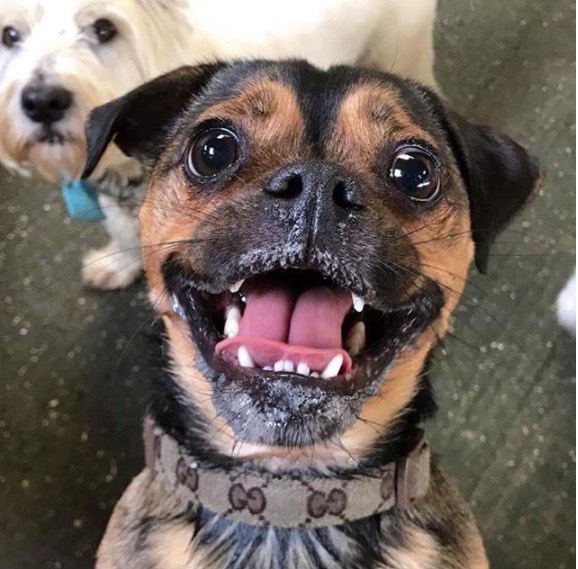 The theory of dominance and pack positions has been around for a long time but the theory has also been debunked for many many years. The theory originated in the 1930’s and 40’s by a group of scientists studying wolves in a captive environment noting how they interacted with each other, how conflict was resolved and who had priority to resources. The theory was then applied to dogs, being a relative of the wolf, by Dr David Mech in the late 1960’s which later became a popular concept with humans living with dogs.

However the dominance theory doesn’t add up. The natural wolf pack is a family, made up of a mating pair and their offspring and on occasions other family members. There is no struggle for dominance with the mating pair ‘being in charge’ (for want of a better phrase) which is very similar to how we (humans) live. They don’t fight for their rank positions and they resolve conflict without anyone getting hurt. The young tend to eat first because the future generations need to be protected but if the bitch is pregnant then she will eat first, meaning the Alpha male will eat last. They don’t allow the Alpha male to walk through a doorway first because quite simply they don’t exist in the wild and if they are on the move the elderly and the young often travel at the front so the alpha can watch from the back.

However the original theory was based on wolves in a captive state. When animals live in captivity their behaviour changes. Captive wolf packs are put together without choosing who their breeding mate will be and the pack is rarely related. Therefore there is no understanding of who has access to resources for example breeding mates, food etc.

So when you compare the two types of wolves (Wild vs Captive) you can see the flaws in the theory but then (bizarrely) scientists decided to apply the captive wolf theory to dogs. Wolves and dogs, although are distant relations, have completely different social structures and behaviours. It’s like saying we are exactly the same as Chimpanzees. Although there are many similarities there are also many differences thanks to domestication.

Remember Dr Mech popularised the theory of dominance in the late 60’s but he has since denounced the idea that us humans should be alpha towards our dogs. So when dogs are showing unwanted dog behaviour in human society it has nothing to do with fighting to be top dog!

So let’s take a look at some of the old pack leader rules and how they should NOT be applied to man’s best friend:

Writing the list above completely depressed me – what a confusing life to live with these crazy rules. Living with dogs should be fun, we humans need to teach our dogs how we live and reinforce the great behaviours they offer and teach alternatives when the behaviour is unacceptable to us. In today’s world I hear people suggest whenever dogs offer normal behaviours that we humans don’t like, the dog is trying to dominate us, or the dog must understand his position in the pack, or the children are above the dog. I hate to break it to you but you are a human and your dog is just being a dog, doing normal dog behaviours. They honestly do NOT go to bed thinking about how they are going to rule the world tomorrow. Unfortunately these rules can teach you to be a bully to get your own way, but who respects a bully?

What is even sadder in today’s world, after this subject has been studied and disproved several times, even by the original chap who came up with the theory, is some dog trainers still tell their customers that you have to dominate the dog and that all their behaviours are linked to dominance, this includes certain TV dog trainers here in the UK and America. In the dog training world, theories and methods are always changing so if you are looking for help from a trainer or behaviourist and they talk about or state on their websites about dominance theories keep looking for an up to date professional who is always evolving with their learning rather than being stuck in the dark ages with a theory that has been debunked many years ago!

If you need help or advice please get in touch. I may not be in your area or country but I can point you in the right direction for up to date trainers and behaviourists so you get the best advice without being a bully towards your dog.